A conversation Between Shawna Trpcic and Gersha Phillips

Summer 2020 The Costume Designer 23 STAR WARS STAR TREK A Conversation Between Shawna Trpcic and Gersha Phillips The landscape of sci-fi would be very different were it not for Star Trek and Star Wars. What was once considered fodder for nerds has become the nucleus of the triumphant rise of geek culture. These two intellectual properties have permeated society so thoroughly that words and terms from them have entered the public lexicon, and symbols they originated are as familiar as traffic lights. Most recently, the Star Wars property has morphed from the film into a live-action television show, The Mandalorian, and Star Trek is back on the small screen in its latest iteration, Star Trek: Discovery. According to a recent article in Business Insider, these series are currently among the top streaming scripted programs. Tackling such a storied project with an ardent and committed fan base is a daunting prospect for any Costume Designer. We arranged a conversation between Gersha Phillips of Star Trek: Discovery and Shawna Trpcic of Star Wars: The Mandalorian, so these two unique talents could converse about two worlds as similaras they are different.

GP: I was in my thirties when I saw the movie Beaches and the title Costume Designer came up. It was a light bulb moment. After that, I tried to figure out how to become a Costume Designer. Most people said it was very difficult, that I’d never been able to do it because I was in Toront” not the huge hub of Costume Design or filmmaking that LA is. But I managed to figure it out. I started working on my first film at the Canadian Film Center. It was a film called House, it was a really great experience. It took a while, but I got in the unions, and just kept going. I had just done a movie of the week for the Discovery Channel called Harley and the Davidsons. Bryan Fuller said he wanted me to help Suttirat Larlarb do Star Trek: Discovery. She had just done a season on American Gods, which was a huge job. Then we went through a showrunners shift on Star Trek: Discovery. Bryan Fuller left and Suttirat left with him and I was asked by Secret Hideout Productions to take over.

ST: I wanted to be a truck driver in high school but I had an art teacher who wanted me to be an artist. So I went to Otis [College of Art and Design], where I chose fashion. In my senior year, I worked on Bob Mackie’s team. Costume Design was like creating fine art for the body because you’re creating this dimensional character and I was hooked immediately. I’ve always been into comic books and science fiction. I had been designing low budget and was the assistant designer to Albert Wolsky on a couple of features when Jill Ohanneson asked me to assist on Firefly. She eventually gave me the show. Years ago, a Firefly fan who worked at Skywalker Ranch asked me if I would like a tour. I met George Lucas, I got to see everything that they were planning for live-action series. I didnâ€™t hear from anybody for 15 years. Then I got a call from her in August 2019. Are you available and are you interested in Star Wars?â€

GP: At first, our mandate was that they wanted it to be grounded in reality. And that’s why we came up with a different uniform with its own signature. It wasn’t until season 2 that we had to get back to the whole legacy of Star Trek. Now we’ve jumped a thousand years to the future, so we’re creating our own world. But for season 2 and a little bit of season 3, we had to get back to canon. One of the great things about Star Trek is that the communicator created the flip phone and the pads that they use are like the iPad. In order to create those things, you need the room to be creative. Allowing people to have the freedom to actually create is what was so great about the original series and the legacy that it had.

ST: With us, it’s almost exactly the opposite. We have to stay within a time period of 1977 to 1981 when the two Star Wars films that we are referencing were created. I was given the mandate You’re designing a period science fiction show. You have to stay within that period. So we tried to use elements that were available during the creation of the original Star Wars.

ST: When I began I considered everything Joseph Porro created for season 1. Then of course I reimmersed myself in the universe of Star Wars, which I have been a fan of since I was 13 years old. Whatâ€™s funny is that Star Wars was super, super low budget. They were filming next to a record building company and they used a lot of cracked-up pieces from record players. Much of the simplicity comes from his budget restraints. I mean, they shot in Morocco, so they had some really authentic exquisite pieces, but we’re also obsessed with period films. So it had that noir effect. I love tapping into that. Anytime I bring something to Jon Favreau, Dave Filoni, and Doug Chiang that’s based in the 1940s or 1950s”or Dungeons & Dragons” it gets approved immediately.

GP: For me, it’s a juggling act. If we’re referencing something from the original series, sometimes I know I absolutely can’t use it because it just doesn’t resonate anymore. It was the late sixties, early seventies when some of those costumes were created, so some of them are just quite wild” like rickrack trim and stuff that would look ridiculous on HD cameras today. We stick between the two and make it happen with the echo of something that was there, but in a way that feels real for today and how we’re shooting our series. 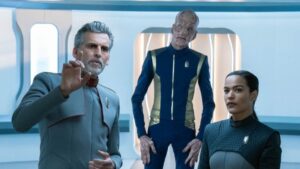 GP: We do a lot of texture printing and 3D printing on top of the fabric. I use a lot of leather. I love leather textures cause you can get a lot of really great, awesome textures. I find that eventually, you run out of what’s available in your area. So you have to go further and further afield. We went to Europe to Premier Vision and Paris and met a lot of different textiles manufacturers just to get a wider concept of what’s happening out there, because I’m looking for new and more otherworldly fabrics. It’s a really tricky thing to do when you do aliens. You want it to look different than all the other ones youâ€™ve done, but even taking our Vulcans a thousand years into the future and what that should look like. All these species that we’re doing now and trying to evolve their technology at the way they build and the way they make their clothing.

ST: Yeah. We have to invent fabrics a lot of the time. I’m trying really hard to stay in a time period, so in order to get some of the textures and patterns, we sew and layer fabrics. Then aging and dyeing all the different textures that I can get from that. I have two dyers just adding textures and dimensionality. There are spray paints that spray sand, and rubber spray paints that are really flexible to get some stretch. We do have Euro jerseys, but we usually cover them in shredded leathers and things like that.

A Movie Every Week

ST: It has to look as good as a film, but I’m shooting a new episode every eight to 10 days. Also, we have huge movie stars, musicians, guest stars, droids, and electronics. I have to make that look like Iâ€™m spending a million dollars an episode.

GP: It’s very similar. Sometimes I look back just to see what we did in season 1, and I’m actually like, “Wow… How did we actually do that? Those things were really amazing and I’m not sure how we made it happen.” We do get a really nice January prep, but you’ve got day players, other aliens, Vulcans, we were doing those massive Klingons in the beginning. That whole journey was insane. So, yeah, it’s like making a movie, every episode. It’s down to the wire for us because you must have three fittings per costume. We’re working upward of 18 hours a day. I always say I go to sleep with a problem and I wake up with the answer, you know what I mean? 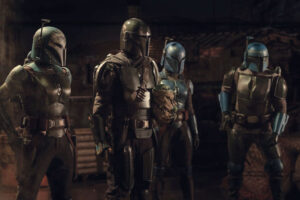 ST: While it takes place in “galaxy far, far away,” I’m considering the planet we are visiting, its climate and temperatures. Also, I am trying to communicate a homespun reality of textures to make the world seem relatable and realistic to our audience. We shoot on The Volume, which is a video game platform the size of a sound stage. It’s a 360-degree circle. It looks so real that when we were filming the Marshall Episode, Jon Favreau had to announce that there was only one way out. The rest of the doors were not real. You walk in and it’s disorienting because you think, “Oh, now I’m in the desert, now “m on a spaceship, now I’m in a bar.” But I think that light saturation affects some skin tones and some of the fabric colors. The warmer colors, the maroons, the browns, oranges, really pop. I saw dailies and thought, “Whoa, that is glowing almost Day-Glo orange.” So, I’m glued to these monitors. We have to color correct on the spot.

GP: We’re just incorporating that this year. It’s really interesting. But that’s a great idea though, of how we can take a few people and make them multiply. It will be interesting because sometimes we are going to shoot five people, but they wanted 10 and my budget only allows for five. It will be good to see how we can take those original characters and multiply them. We will have a lot of situations where we’ll have people in the wall [the projection] and people on the floor [the actual set] that should look like they’re in the same place. It will be fascinating to see how that goes.

ST: In a few episodes of season 2, we’re introducing live-action characters that have only ever been seen in animation. They’re so important that people speculate about the possibility of seeing them on screen. They are going nuts about who’s going to play them and what they’re going to wear. I love Comic-Con. That’s my world, and those are my people. When I’m making things with my tailor, we put small details that only serious cosplayers will get. When we see it, we’ll say, “You studied that costume!” So, we do think about them and we do honor them. There is always that apprehension when you’re dealing with a beloved character. But I come from that world and I get it and I respect it. I love that accountability.

GP: Yes, when we went to the Star Trek Convention, seeing people walking around in the costumes that I designed was really great. I remember one family and they dressed their middle daughter as Giorgio, the emperor, the cape, the gown, which was this great gold jacket with a train and the husband was an Imperial Guard.