Jenny Eagan, costume designer for the new star-studded Glass Onion: A Knives Out Mystery, has a career path defined by opportunities taken. Although she did not formally study costume design, her many award-winning projects feature characters who leap off the screen, thanks in no small part to her costumes. Who would have thought a girl from Independence, Missouri would end up in this profession? “Certainly not my Mom,” laughs Eagan. “I wanted to be a middle-school teacher to make a difference. Halfway through college, I switched to textile marketing and merchandising because I love clothes, but never knew that could lead to working in the entertainment industry.” Post-graduation, Eagan drove cross country to live in San Diego, where she became ‘excellent on rollerblades’ before following friends to Los Angeles. She joined a temp agency and her first interview was for a low budget film. As fate would have it, Mary Zophres was the costume designer on her second temp job. Eagan shadowed her on weekends, getting coffee and grabbing lunches. She observed and absorbed everything, until Zophres invited her to join the team on Any Given Sunday, her first job as a production assistant. Six months at Western Costume Company gained her entry into the Union. She spent over a decade with Zophres, progressing from production assistant to assistant costume designer. “Mary hates when I say she was an amazing mentor, but I didn’t know anything and she taught me everything.”

Her first feature as a costume designer was Contraband, with Mark Wahlberg and director Baltasar Kormákur, but the project that launched her career was the first season of True Detective for HBO. The show garnered her the Costume Designers Guild Award for Best Contemporary Television Series in 2015. “It was an amazing experience and a confidence builder for me.”

Eagan moved on to design several small but critically acclaimed films and television series including Olive Kitteridge which won her an Emmy, Widows, and the celebrated  Beasts of No Nation. The first iteration of the Knives Out trilogy, written and directed by Rian Johnson, was an unmitigated hit. “Because of our limited shoot time, we had all guns blazing,” she says. “I feel like I fit every single one of the cast members the week before. Thankfully, Rian wrote well-defined characters and chose seasoned actors. We were all in sync.” She was awarded her third CDGA for her efforts.

Johnson wanted everyone to ratchet it up for the sequel, Glass Onion: A Knives Out Mystery. Eagan decided early on that most of the costumes would be custom made. Shooting on a remote island off Greece and in Serbia during Covid, she knew she could not count on shopping. She prepped in Los Angeles, anticipating multiples for principals and stunt doubles, then brought extra fabrics to cover her back. While designing the first Knives Out, Eagan forged great relationships with Johnson and producer Ram Bergman. They agreed that travel during the pandemic could be problematic and allowed her to bring her union team from Los Angeles. She brought ACD Jessica Albertson, supervisor Emily Egge, set costumer Claire Sandrin, and cutter/fitter Erica Ciaglia. “Claire, Emily, and I first worked together on No Country for Old Men (designed by Mary Zophres) and have collaborated as much as possible since. I was thankful for this luxury. I’m not a one-man show, we are a team.” 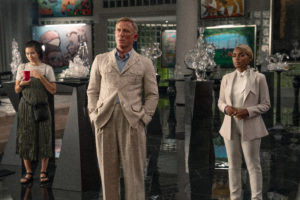 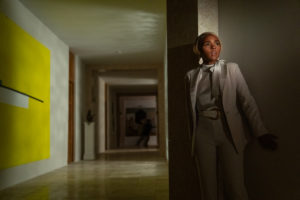 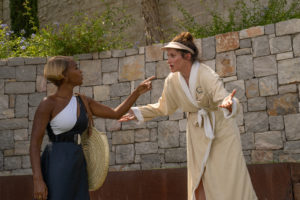 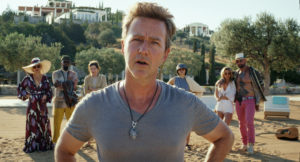 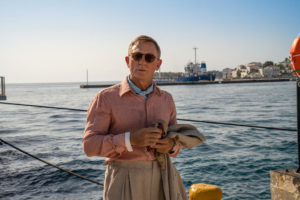 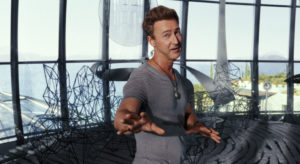 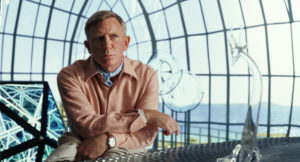 Everything is completely different in the sequel—story, location, and characters. Only Daniel Craig remains in the new cast. “I approached his costumes thinking master-sleuth Benoit Blanc has been all around the world,” says Eagan. “He readies for the scenario he’s facing as though he’s suiting himself in armor.” She brightened his colors and gave him an understated flare. To convey the character’s idiosyncratic style, Eagan played with some retro looks, choosing high-waisted pleated pants, neckerchiefs, and vintage fabrics for his custom-made shirts. His swimwear was a separate conversation. The script described him in a pool wearing a shirt. Eagan reflected, “Did he just go in with his shirt on? We played around with different options and liked the two-piece-set idea, but we didn’t have ‘the thing’. I was at Anto’s Distinctive Shirtmaker and spied a shirt style that was originally created for Paul Anka in the ’70s. Anto still had the pattern, as well as one for shorts made for Frank Sinatra. When the ensemble was completed, I knew we would love it.”

Edward Norton had ideas about his billionaire character Miles Bron. He mentioned big tech guys that have too much money. They buy all the gadgets, toys, yachts, and houses. “Their clothes might be incredibly expensive but they don’t look it. From V-neck cashmere sweaters and white pants to minimalist suiting, they are simple and effortless,” says Eagan. “Edward really enjoys discussing his costumes and is interested in every little detail even down to the choice of a bracelet. What he brought to the table made our collaboration really fun.” Kate Hudson is as effervescent, charismatic, and vivacious as her character, Birdie Jay. “When I told her we were making everything, she screamed with joy. Kate is the most confident person I’ve ever worked with, which allowed me the freedom to really go for it. Everything was over the top. Bright colors, big bold prints, tons of jewelry, huge bags, and bigger-is-better hats.” In an online People Magazine interview, Hudson shares, “Jenny did an amazing job. I walked into my first fitting and I was like a kid in a candy store. It was so much fun to put ‘Birdie’ on.”

The rest of the ensemble cast is designed with Eagan’s characteristic panache. Both Janelle Monáe’s stunning gowns and Leslie Odom Jr.’s suits exude elegance. Dave Bautista, well-muscled and covered in tattoos, is flamboyant in animal prints. He always sports a holstered gun, even in his Speedo. His girlfriend Madelyn Cline, politician Kathryn Hahn, and Birdie’s assistant Jessica Henwick round out the rest of the “disruptors” in this well-crafted whodunit that keeps you laughing and guessing right up to the unpredictable ending. It is the dynamic of strong characters seamlessly executed in the costumes that makes the comedy work.