Ann Roth: The Person In The Mirror

The Person In The Mirror

Like any great story, the hero has a drive and motivation the audience never sees. Following her CDGA win for Period Film and recent Best Costume Oscar for Ma Rainey’s Black Bottom, Communications Director Anna Wyckoff spoke with Roth and her long-time colleague, fellow costume designer Carlo Poggioli. “I want to say something about our friendship, our experiences together, and the Ann people don’t know,” he confides. In conversation, we gain insight into the mind that commands the fitting room and conjures characters from a looking glass.

Wyckoff – How did the two of you meet?

Roth – We met through a woman in Pennsylvania who was married to a producer in Italy.

Poggioli – On The English Patient. In fact, when we were prepping a scene you told me something I have had in my mind for my entire career: ‘To make it as believable as possible, the costume must contain something that does not make it perfect, a wrong accessory, a color mismatch.’

Roth – I don’t say, ‘I have to do something to ruin this costume.’ [laughs] It came very naturally to me that I would do something weird, peculiar, or eccentric. And I would say, ‘Why should it be perfect?’ In fact, the hat on Viola Davis in Ma Rainey’s Black Bottom — let’s say some woman in Mississippi made that dress for her and that she had a fur. She wanted to look sensational as she walked down those steps, but she had a newsboy hat on her head because that’s what she thought was hot stuff. She liked it. She really didn’t give a damn about all those women sitting in that hotel tea room looking perfect. She wanted that weird hat on her head, which was a little boy’s hat. That is a good example of what Carlo’s talking about, the imperfection, the thing that is out of character, or maybe it’s in character.

Wyckoff – There’s a truth that leaps off the screen with your work. That’s why I was so taken with the last film. With everything you do, you answer to the intention. You’re not afraid.

Poggioli – I had so many phone calls when you won the Oscar, and they were so enthusiastic because they were saying you put so much energy into the film. That is the particular thing that you can see, the energy.

Roth – That’s the first time I ever heard that. That makes me feel really good. I have to think about it. The energy.

Wyckoff – You have this amazing forward momentum. Each project you do seems to be so total. Then you take that energy and put it into the next thing you do, and that captures your imagination. What keeps you going?

Roth – It’s really exciting to go into your studio and start drawing. If you like the literature, I guess you want to do it? I’m starting a new movie now that is so difficult to even think about. It’s a Don DeLillo picture and Noah Baumbach and Greta Gerwig are doing it. It’s very demanding and it’s a lot to think about.

Wyckoff – Tell me more about The English Patient.

Roth – No one wanted to do that location. It was on the bottom of Tunisia, a six-hour drive. The entire trip we saw absolutely no one. No other human being.

Poggioli – Except a truck of Bedouin. No phone.
No cell. Nothing.

Poggioli – We were waiting and deciding what to do. And you were looking at two little camels, one white one and a black one, and you were too fascinated to be worried, Ann.

Roth – Exactly. We turned around and saw these Bedouin in an old Chevrolet that was tied together, and there was this box sitting on it. They had found it and brought it to us. It was a miracle. 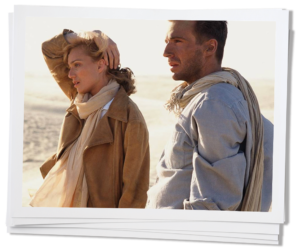 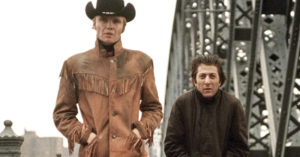 Poggioli – The crew was waiting for the costumes, so we went and arrived in a place that had no water to wash. Do you remember?

Roth – I remember. I slept in a tent by myself. It was part of our life. We had a lot of that kind of life.

Poggioli – Yes. In fact, after The English Patient, we became a big family. We were spending time every day, having a dinner, everybody cooking, having a wonderful time. 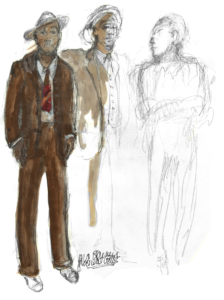 Through the Looking Glass

Roth – I think the important thing is when you have the actor in front of a mirror, that the best thing you can do for that person is something so that she doesn’t recognize herself. In other words, if she’s standing there in a dress and you suddenly rip the hem out and it’s four inches too long and they’re looking in the mirror and they don’t quite see themselves. They see something else start to appear. You’ve done something to jar the image. When you take away who she is, then she’s free to become someone else. She’s got the guts to do something because she’s on the road to the disguise already. That’s what I do. But I’m not aware of how other people fit, except maybe you, Carlo. But I haven’t been in the room with other designers when they’re fitting. I like the fitting room very much. And I can tell if it’s going to work right away.

Poggioli – We know that for costume designers it’s important to help the actor be in character, but the patience that you have explaining everything about how they should relax or face the camera. That’s why they love you.
Roth – Well, there are actors and there are movie stars. Movie stars don’t want you to fool around with who they are. They have established an identity and know how they look and how they behave. That’s very different than an actor who is doing a character. I work with actors, and actors are interested in becoming someone else. This morning I was fitting Kathy Bates. She’s playing a Jewish grandmother. We put some dopey eyelashes on her and she wasn’t Kathy Bates. She just became someone else. And it spurs you on. OK, we have these eyelashes, stick these glasses on. The person in the mirror starts telling you what to do. Put those Dolly Parton earrings on. That’s the game. That’s the excitement of creating a character.

Poggioli – That was a big lesson for me. The confidence and the way you are teaching them. They are enthusiastic, because your suggestions were very important to create the character.

Roth – But of course, the important thing for the actor to know is that you are there to help them find a character. You’re there for them. You’re not there for yourself. They’re not walking around with a board that says this dress came from Ann Roth. You help the actor find the character. That’s all.

Poggioli – One day I was talking with you and you said, “God, I don’t understand why we have to do so many multiples for the actor today.” And you told me the story of when you did Midnight Cowboy.

Roth – All the kids that work with me say they are so tired of hearing that Midnight Cowboy was one shirt.

Wyckoff – One perfect shirt. How do you keep this love for the search?

Roth – Carlo and I have the same process. The first part of it is research and we both go overboard. I would say to the point of craziness. Seriously. When we were doing Cold Mountain, apparently there was a movie being done in Los Angeles about the Revolutionary War and the internet reenactors found incorrect costumes. And they had a lot to do with hurting the movie. When we started to do Cold Mountain, not because of that, but just because we are crazy, we went very strong on research. And, so, now we’re in Romania, in the mountains [doubling for the Blue Ridge], and in come these guys on per diem from the Smithsonian having the time of their lives looking for all the stuff that’s wrong. And they couldn’t find anything. We were just on the money. So, we start with the research craze. The second thing we do is find the fabric. And a third thing—we don’t ever tell anybody where it comes from.

Poggioli – Oh yes, they made for us the same kind of wool fabric as the original uniforms.

Roth – We’re very secretive. And in fact, regarding the glove makers and the shoe makers, we don’t share that information. I learned from Irene Sharaff. She wouldn’t tell anything about anything and I’m the same way and so is Carlo.

Poggioli – You taught me many things, not just about costume, but general life. When the army came with a thousand soldiers, after days in the mud and the dirt, and they would line up to take a shower. But they never had soap because the army chiefs used the money for other things. You organized the crew to bring soap from the hotel. So, every morning we were bringing big bags of soap.

Roth – We took all the soap from the hotel. That was
terrible, the way they were treated.

Poggioli – And you went to visit the school and they didn’t have crayons. You organized people to send things from all over the world to the middle of nowhere. People don’t know a lot about the social things that you do. 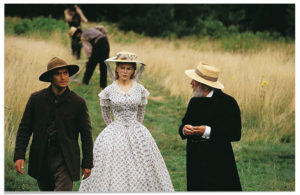 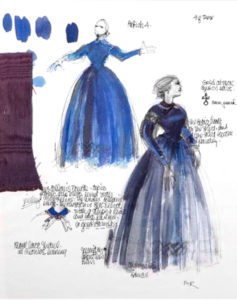 Poggioli – I will never forget the power, because she is so very clear with everybody. Ann has nothing to hide. You know, she’s so sincere, she doesn’t care whether they are a producer or a director. All the people are the same. I will never forget: We were shooting in South Carolina doing the scene when people were picking cotton. At one point, you got a phone call from Mister Miramax. You know who I’m talking about.

Poggioli – They were in [Martha’s] Vineyard while we were doing this scene, and it was so unbelievably hot. And one of the two brothers said, ‘You know, Ann, these costumes for Nicole probably could be better.’ And at one point you said, ‘If you have something to say, instead of being in your vineyard, take your helicopter, come here and say it.’ I will never forget.

Roth – I never feel out of control with directors or producers. It’s a good life being a costume designer because intellectually, artistically, and socially, if you are engaged in the process, the finale is something you have control over.